50 Cycling Terms Every Rider Should Know - Easy Life Secrets
Trending Now
Universal health care must be a priority —...
Hong Kong unveils details of bill to lure...
In pictures: the refugees who started a music...
How to Use the 55×5 Manifestation Method to...
Prince Harry, Oprah release trailer for mental health...
16 Yummy Vegan Picnic Salads
Isle Of Wight Health Director Urges “Caution” Over...
Pet Friendly Things To Do in Tulsa
And Then This Is How I Changed My...
Does Karmic Debt Exist? – ErinPavlina.com
Home Nutrition 50 Cycling Terms Every Rider Should Know
Nutrition

Like any niche activity, cycling has its own lingo. Not sure what your new cycling pals are jabbering about after your weekend ride? We’ve put together a glossary of some common cycling terms to get you up to speed.

“These terms carry some emotional weight, helping to downplay horrible things and adding some frisson to things we are proud of,” says Scott Saifer, cycling coach at Wenzel Coaching.

Tell your fellow cyclists you “picked up some wicked road rash at the yard sale” and you’ll earn sympathy and cred.

Sure, saying “I fell off my bike” would get the point across too — but adopting these cycling terms “is part of your self-declaration of being a cyclist,” Saiter says.

So whether you’re a devoted road racer or prefer the challenge of gnarly trails, next time someone says they’re bonking, or calls you a good wheel, you’ll know exactly what they mean.

From gear to technical skills to slang, here are some cycling terms to get familiar with.

An inexpensive, possibly old, but operable bike — great for everyday use, but not a huge loss if it’s wrecked or stolen.

Cycling shorts with overalls-style elastic shoulder straps instead of an elastic waistband.

(Pro tip: You’re supposed to wear these under your jersey.)

The soft pad inside your bike shorts that pads your butt and prevents chafing when you ride long distances (pronounced “shammy”).

Pedals that accommodate cycling shoes with a cleat that locks into a groove.

A bicycle with an electric motor.

A mountain bike with a front suspension but no rear suspension.

A mountain bike with front and rear suspension.

Handlebars that support a rider’s elbows, allowing them to assume an aerodynamic shape. 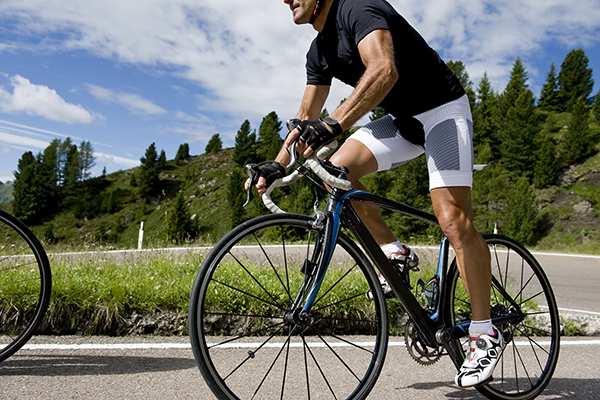 In triathlon events, a separate division for female athletes over 165 pounds.

An aggressive attempt to overtake another rider.

The rate, in revolutions per minute (RPM), that a rider pedals.

An uphill portion of a race or ride.

In triathlon events, a separate division for male athletes over 220 pounds.

To navigate a curving length of road.

To finish behind all the other racers (in other words, dead beeping last).

A racer who rides in service of another member of a cycling team.

To ride closely behind another rider to reduce wind resistance.

To leave another racer behind.

A group of cyclists riding in a diagonal, single-file formation to minimize wind resistance.

A sudden acceleration to catch a group of riders in front of you.

A group of cyclists riding in close proximity (also called a bunch).

The main pack of cyclists in a race.

To assume the front spot in a group of riders, reducing wind resistance for other riders behind you.

A vehicle that rides behind the pack, providing food, water, and gear, as well as picking up exhausted or injured racers.

A bike race against the clock, typically held one racer at a time, or with a group of racers working together.

A rider who never takes a turn up front to shield other riders from the wind. 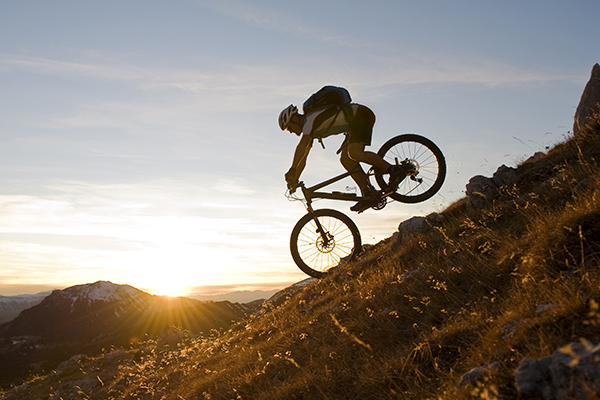 In mountain biking or BMX, a wide jump or gap that’s potentially dangerous to attempt.

A combination of cycling and camping, carrying all your gear on your bike from place to place.

To completely run out of energy during a ride or race (a.k.a. die or hit the wall).

A BMX trick where both wheels leave the ground, typically used to surmount or avoid obstacles.

Challenging or hardcore, especially in BMX.

To acquire fancy bikes or parts in hopes of going faster.

A trick in which you ride on the front wheel only (also known as a stoppie); or a crash in which the bike flips over its front wheel.

A rider who holds a steady pace with minimal swerving.

The lowest gear on a multi-speed bike, used for very steep climbs.

Ride hard for an extended period.

To push down too hard on your pedals, usually while standing, which may be a sign you need to downshift.

To ride at a very easy pace.

Abrasions from sliding on pavement during a crash.

An off-road trail only wide enough for bikes to ride single file.

To adjust the spokes on a wheel so it spins without wobbling.

A trick in which the rider pedals with their front wheel raised off the ground.

A crash so bad that items from your pockets, and possibly parts of your bicycle, are strewn across the road.

What to Know About Your Dog’s Pulse – Dogster

The Complete Guide to CBD: Everything You Need to Know

As If We Needed Another Reason to Avoid...

No Kitchen is Truly Happy Without Our White...

Whip Up a Batch of Our Cauliflower “Potato...

Make Your Next At-Home Brunch a Fancy Affair...

The Best Ways to Make Your Walk More...

The Easiest Ways to Add Plant-Based Protein to...

12 Outdoor Workout Tips for Exercising Outside