Daily health tips for the happier Life
Trending Now
How to Overcome Burnout: 3 steps to have...
How the Exponential Power of Thanksgiving Transforms the...
Why Quitting Addictive Substances and Bad Habits is...
10 Ways To Recognize Pefectionism Within Yourself |...
Firefighter who responded to 911 call ends up...
How to Learn More From Fewer Books (Read...
This Marine dog with terminal cancer receives one...
What Happens When We Enslave Ourselves to Work?
How to Deal With The Agony Of Defeat
He Didn’t Want a Partner, He Wanted a...
Home Think positive thoughts In pictures: photography competition brings ocean conservation into focus
Think positive thoughts

“This is a photograph of hope, a glimpse of how the ocean can be when we give it a chance.” So said judges announcing the winner of the 2021 Underwater Photographer of the Year competition, which for the first time has been awarded to a female photographer.

“French Polynesia strongly protects its sharks, it is my favourite place to photograph them,” said Capozzola. “I dedicated several evenings to photographing in the shallows at sunset, and I was finally rewarded with this scene: glass-calm water, a rich sunset, sharks and even birds.”

Chair of the competition judges, Dr Alexander Mustard MBE, said “this is a photograph of hope, a glimpse of how the ocean can be when we give it a chance, thriving with spectacular life both below and above the surface. The photographer not only persevered until this serendipitous scene unfolded, but more importantly Renee had the talent to capture this precise moment.”

The UK-based contest also had a category for British Underwater Photographer of the Year 2021. Mark Kirkland from Glasgow won that for his picture of a frog sitting on frogspawn in an inner-city pond near his house (below). 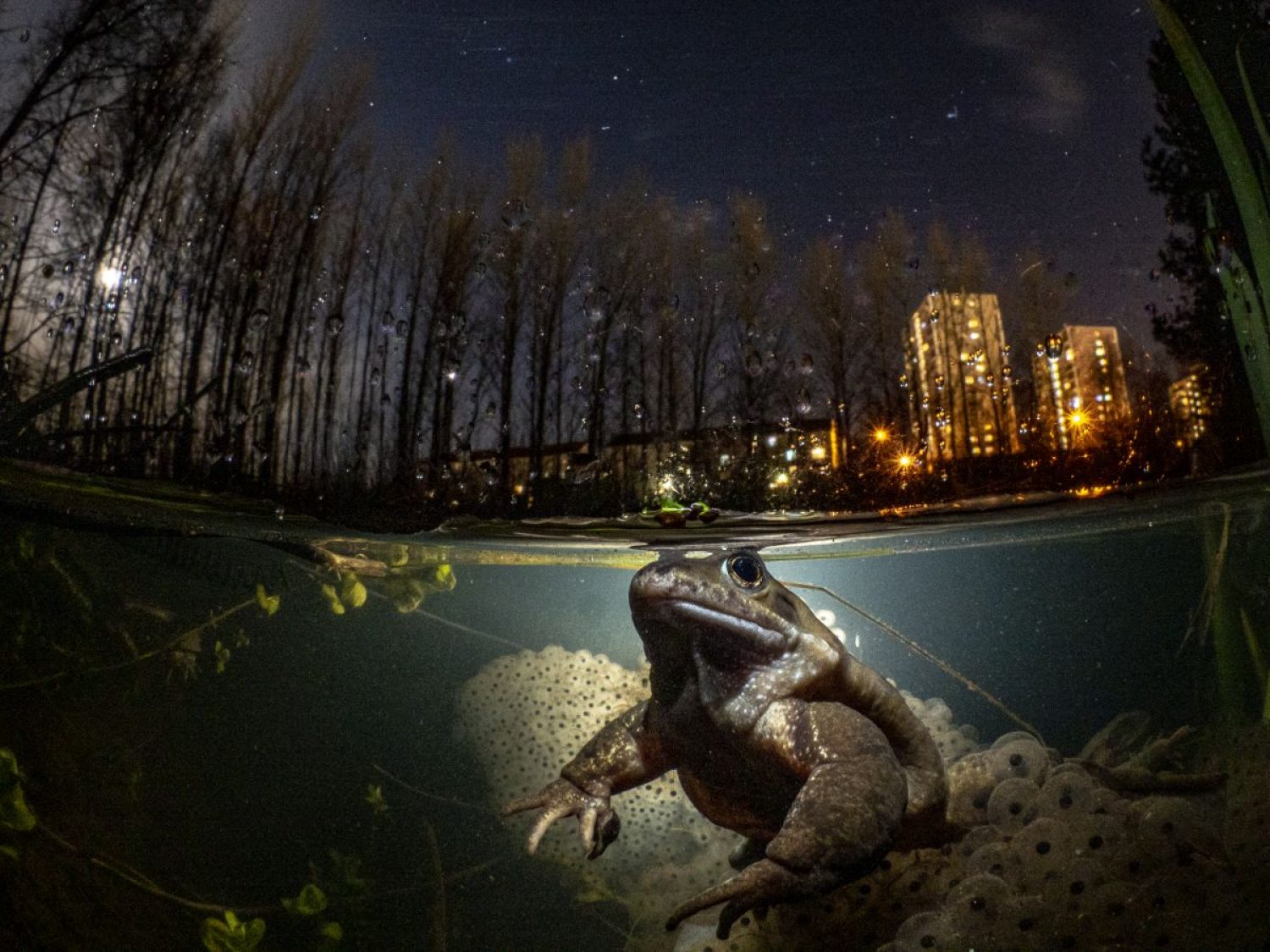 A frog sits in a pond near tower blocks in Glasgow. Image: Mark Kirkland/UPY 2021

“This remarkable image shows that even in the centre of the city of Glasgow, frogs and world class underwater photography can thrive,” said Mustard.

Among the other categories in the Underwater Photographer of the Year competition is one that celebrates animal behaviour. That was won by Karim Iliya, also from the US, who captured a stunning photograph of a marlin hunting smaller fish in Mexico (below). 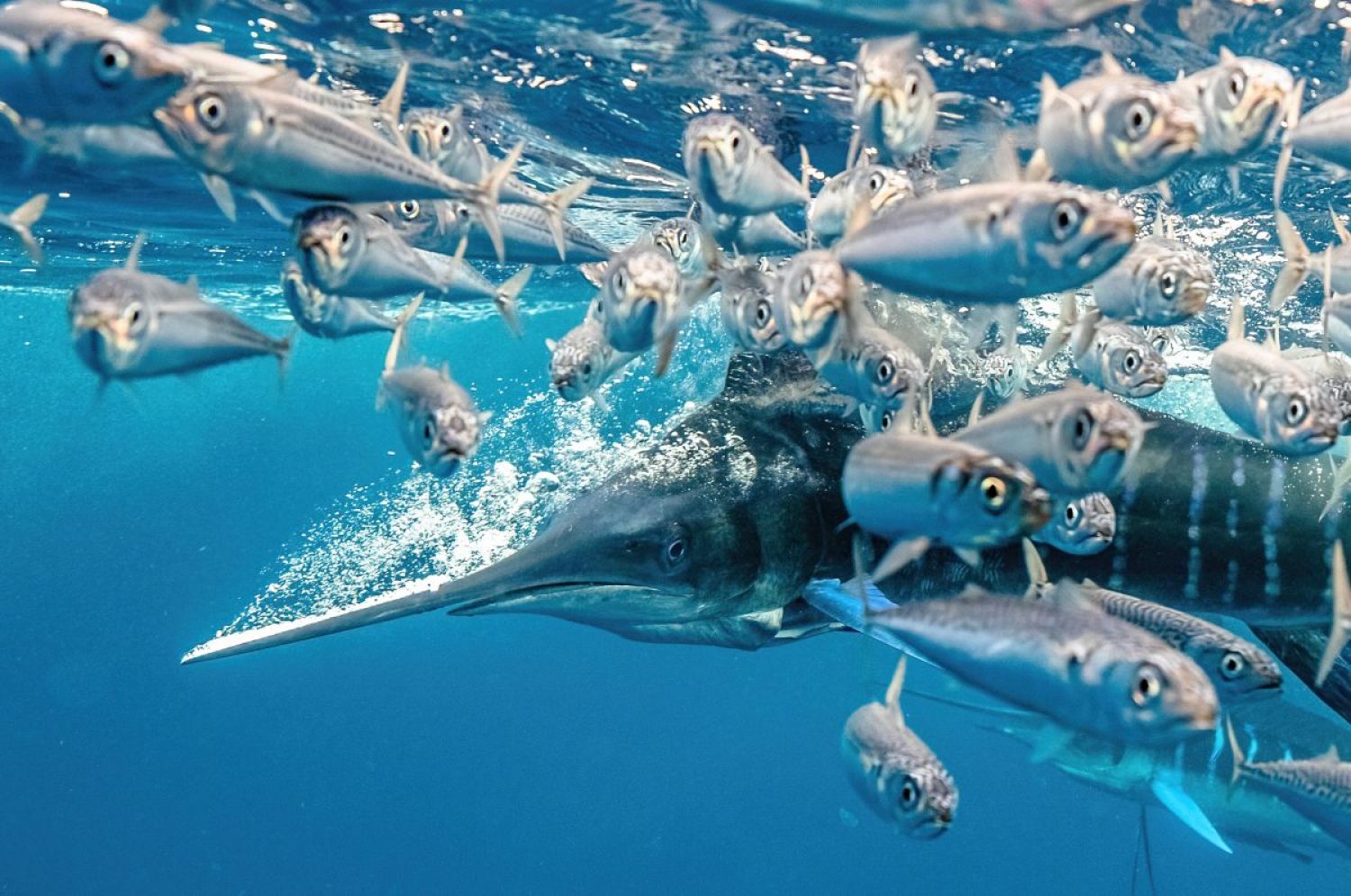 “Marlin are one of the fastest fish in the sea, a terrifying predator for a small fish in the great blue desert,” said Iliya. “I went to Mexico to document these feeding frenzies but was not expecting such a fast-paced hunt, almost too fast for my brain to process. For a brief moment, this scene unfolded before me and I had to rely on all my instincts and practice underwater to take this photo.”

Below are some other photographs that caught judges’ eyes among the 4,500 entries.

What’s Your Wardrobe Average? A Tool to Help You Shop LESS and Wear Only What You Love {Episode 16}