Daily health tips for the happier Life
Trending Now
How to Overcome Burnout: 3 steps to have...
How the Exponential Power of Thanksgiving Transforms the...
Why Quitting Addictive Substances and Bad Habits is...
10 Ways To Recognize Pefectionism Within Yourself |...
Firefighter who responded to 911 call ends up...
How to Learn More From Fewer Books (Read...
This Marine dog with terminal cancer receives one...
What Happens When We Enslave Ourselves to Work?
How to Deal With The Agony Of Defeat
He Didn’t Want a Partner, He Wanted a...
Home Health Kevin Durant pulled from game twice due to Health and Safety protocols
Health 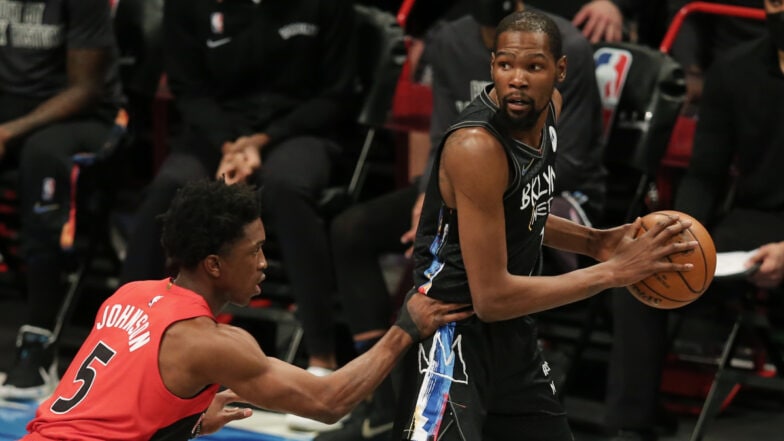 NEW YORK (AP) — Brooklyn Nets star Kevin Durant couldn’t start a game and then couldn’t finish it, removed in the third quarter because of the NBA’s health and safety protocols.

Durant wasn’t available at the beginning of Friday night’s game against Toronto, eventually being cleared to enter in the first quarter. Once he did, it became his first appearance as a reserve in his 867 NBA games.

NBA spokesman Tim Frank said in a statement that Durant had tested negative three times in the last 24 hours, including two negative PCR tests Friday. He said someone whom Durant interacted with in the afternoon had an inconclusive test result return shortly before the game. Durant was initially held out while that result was being reviewed.

“Under the league’s health and safety protocols, we do not require a player to be quarantined until a close contact has a confirmed positive test,” Frank said. “During the game, a positive result was returned for the person Durant interacted with. … Once that test was confirmed positive, out of an abundance of caution, Durant was removed from the game.”

Frank said contact tracing is underway to determine if Durant was in close contact of the individual who tested positive.

Durant helped the Nets rally to take the lead before he was informed in the third quarter that he needed to exit the game. Replays showed coach Steve Nash appearing to give the news to Durant, who walked toward the locker room area and threw a water bottle in frustration. The Nets then announced he was out for the rest of the night.

Durant had already missed three games this season related to the health and safety protocols. He tested positive for the virus in March while he was recovering from Achilles tendon surgery.

According to the Elias Sports Bureau, Durant had the fourth-longest streak of games started (866) before coming off the bench since 1970-71 (when starts were first tracked). Only Patrick Ewing (1,118), Carmelo Anthony (1,054) and Chris Paul (1,041) had longer streaks than Durant.

Durant finished with eight points. He had scored at least 20 points in all of his 17 games thus far, the longest streak to begin a season in his career.

7 interesting water facts you should know about! – water conservation: How to save water