Daily health tips for the happier Life
Trending Now
How to Overcome Burnout: 3 steps to have...
How the Exponential Power of Thanksgiving Transforms the...
Why Quitting Addictive Substances and Bad Habits is...
10 Ways To Recognize Pefectionism Within Yourself |...
Firefighter who responded to 911 call ends up...
How to Learn More From Fewer Books (Read...
This Marine dog with terminal cancer receives one...
What Happens When We Enslave Ourselves to Work?
How to Deal With The Agony Of Defeat
He Didn’t Want a Partner, He Wanted a...
Home Pets Health New Rules For Flying Emotional Support Animals
Pets Health 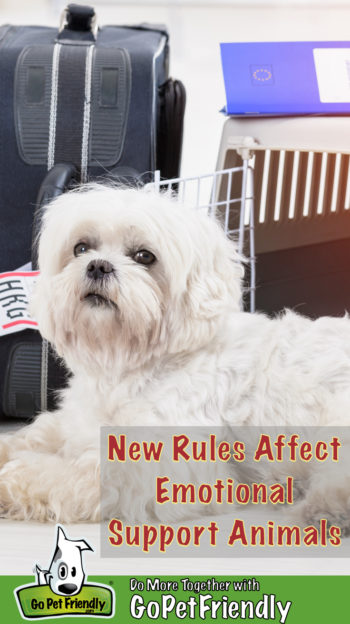 New rules force passengers with emotional support animals to pay the pet fee or leave them at home.

In December, 2020, the U.S. Department of Transportation issued a final rule that affects people flying with emotional support animals. It defines a service animal as “a dog, regardless of breed or type, that is individually trained to do work or perform tasks for the benefit of a qualified individual with a disability, including a physical, sensory, psychiatric, intellectual, or other mental disability.”

The Transportation Department proposed the new rule in January, 2020, and received more than 15,000 comments. While some commenters favored dropping protections for support animals, twice as many people spoke in favor of them, the department said.

The agency changed the rule partly to stem the tide of passengers carrying unusual animals on board. It also cited the increasing frequency of people “fraudulently representing their pets as service animals.”

These actions “eroded the public trust in legitimate service animals.”

In response to the new rule, Alaska Airlines, American Airlines, Delta Air Lines, and United Airlines announced that emotional support animals will no longer be flying for free.

Only trained service dogs will fly in the cabin while not being in a carrier. And the airlines can require people with a service dog to turn in paperwork up to 48 hours before a flight vouching for the dog’s health, vaccinations, behavior and training.

The rule doesn’t allow airlines to bar travelers with service animals from checking in online like other passengers.

The airlines consider all other animals as pets. They can fly in carriers that fit under the seat in the cabin or in cargo. Either way, owners will have to pay a pet fee, which varies by airline.

Estimates have the airlines gaining up to $59.6 million a year in pet fees.

In the new rule, the DoT stood by an earlier decision on pit bulls. Their ruling prohibits airlines from banning entire dog breeds as service animals. This is a setback for Delta Air Lines, which banned “pit bull type dogs” in 2018.

Delta, however, isn’t backing down. In a statement, a Delta spokeswoman said the airline is reviewing the new rule but, “At this time, there are no changes to Delta’s current service and support animal policies.”

With airline pet fees starting at $100 each way, pet owners should consider road trips with their furry travel companions. Whether it’s a trip to hike in the mountains, romp on the beach, or exploring a new city, GoPetFriendly is here to help you do more together.

Is Your Dog Restless at Night? Here’s What’s Going On

After the Election-from Choosing Our Leaders to Embracing One Another

9 Festivities for Fido That Give Back –...

10 Gift Ideas For Women Who Travel