Daily health tips for the happier Life
Trending Now
How to Overcome Burnout: 3 steps to have...
How the Exponential Power of Thanksgiving Transforms the...
Why Quitting Addictive Substances and Bad Habits is...
10 Ways To Recognize Pefectionism Within Yourself |...
Firefighter who responded to 911 call ends up...
How to Learn More From Fewer Books (Read...
This Marine dog with terminal cancer receives one...
What Happens When We Enslave Ourselves to Work?
How to Deal With The Agony Of Defeat
He Didn’t Want a Partner, He Wanted a...
Home Think positive thoughts Why Friendships in America Are Dying
Think positive thoughts

Why Friendships in America Are Dying


Friendships in America are dying. Even prior to the global pandemic, the role of friendship in American social life was waning. That finding is the result of a recent survey on American friendships.

According to the survey, fewer Americans now claim to have a BFF. Just imagine Thelma trying that epic road trip without Louise.

The main culprit for the lack of “best friends” is time. Americans are busy. Or at least we seem to be. And, life seems to get busier as we age. Our friendships take a backseat to nearly every one else in our orbit: spouses, parents, children, grandchildren. You get the point.

“Best friends are the people in your life who make you laugh louder, smile brighter and live better.”  — Unknown

The secondary culprit is self-reliance. That is, Americans are simply not engaging friends for emotional support. The trend is concerning when you consider that deep friendships are proven to enrich your life and improve your health.

More than half of respondents report that their first choice for talking through difficult personal problems is their spouse or partner. But, with the average age of first marriages rising faster than the price of Starbucks pumpkin spice latte, a surprising surrogate has stepped in to fill the gap: parents.

Another likely culprit is work. American’s spend more waking hours at work than at home. And, employers are spending more time and energy creating cultures that facilitate deeper office relationships. Part of the reason is having a best friend at work is convenient and it fuels greater performance. However, the pandemic has changed all that.

Throughout 2020, employers were forced to make staffing changes to stay solvent. Those who remained employed were asked to work remotely, dramatically reducing the amount of time that co-workers spend together. This, during a time when more than one in five Americans say the past 12 months have been much more difficult for them than usual.

Almost half of Americans surveyed have lost touch with at least some of their friends over the past 12 months. Further, sixteen percent of women ages 18-29 report having lost touch with “most” of their friends during the pandemic. Only nine percent of men in that age cohort report similar results. This is not surprising information. Women invest more time in friendships than men do. And, those friendships are deeper emotionally.

In contrast, male friendships tend to be transactional. So, while women need to see friends to connect, men are totally the opposite. Men can go months or even years without face-to-face contact and still consider someone a close friend. Men can simply pick up where they left off, despite having missed important birthdays, funerals, and bar mitzvahs.

Last year I wrote a popular piece called Top Five Regrets of the Dying. Ironically, the fourth most common regret of the dying is, “I wish I had stayed in touch with my friends”.

Of those who do rely on friendships, many report a reduction in the number of close friends. In 1990, thirty-three percent of Americans reported having ten or more close friendships, not including relatives. Today, only thirteen percent report having that number. So, ironically, the TV show Friends would never get the green light today. It’s just too unrealistic to think someone could have that many friendships.

Back in 1990, three percent of respondents indicated having no close friends. The number of Americans reporting “no friends at all,” has grown 400% since 1990. And, that means we have a growing number of folks in the US that are just plain lonely. More on that topic in the weeks to come. 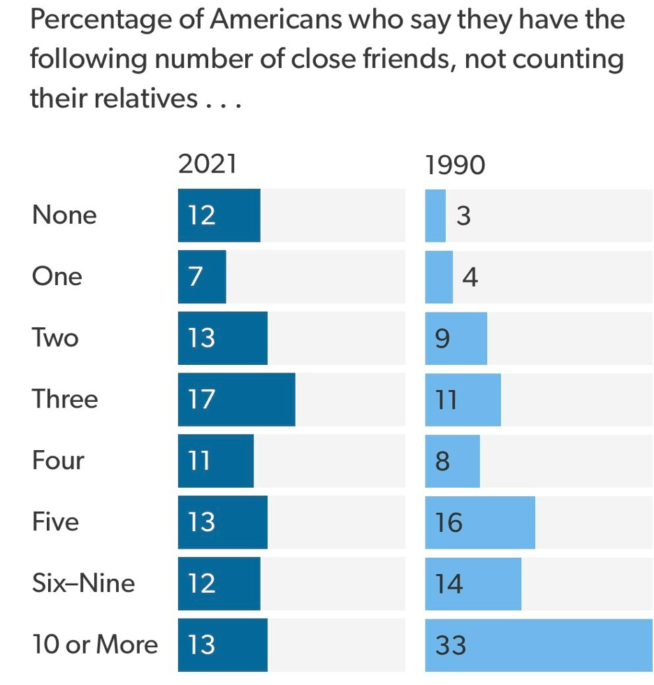 As we age, we only devote about 30 minutes a day to maintaining friendships. That’s about 90 minutes less (per day) than when we were age 18. As a result, we’ve replaced deep friendships with “situational friends.” These friendships are casual and a byproduct of seeing people in a consistent place.

Further, 51 percent report having “activity friends,” or friends as a byproduct of sports, community service, or hobbies. And, these friendships were the first to die when Covid hit.

Historically, Americans have relied on houses of worship for at least some friendships, as social relationships lie at the very heart of religion. However, our membership in houses of worship continued to decline last year, dropping below 50 percent for the first time in eighty years. In 2020, 47 percent of Americans said they belonged to a church, synagogue, or mosque, down from 50 percent in 2018 and 70 percent in 1999.

Regardless of age, our friendships are a key driver of happiness. According to the Mayo Clinic, friendships enrich our lives and make us healthier.

As we ease out of our Covid hidey-hole, let’s reinvest our time and energy into being happier and healthier. How about sending this article to an old friend with an invite for a pumpkin latte? It’s a great way to crack the ice and reinvigorate your friendship.

So, what do you think? Do you feel like you have enough close friends? Either way, leave me a comment below and let me know your thoughts. I promise you’ll hear back from me. Maybe we can be friends. 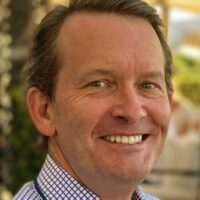 Tom Greene is a writer living in Atlanta, Georgia with his wife, daughter and two wiener dogs. Connect with him on Twitter, Facebook, my Facebook Group, Pinterest, Medium, Instagram, and Goodreads. And, you can now purchase his book, Wit & Wisdom: Stories For The Journey Through Life, on Amazon!

How I Overcame ‘Perfectionism Anxiety’ in Order To Live My Best Life | by Yana Bostongirl | Oct, 2021